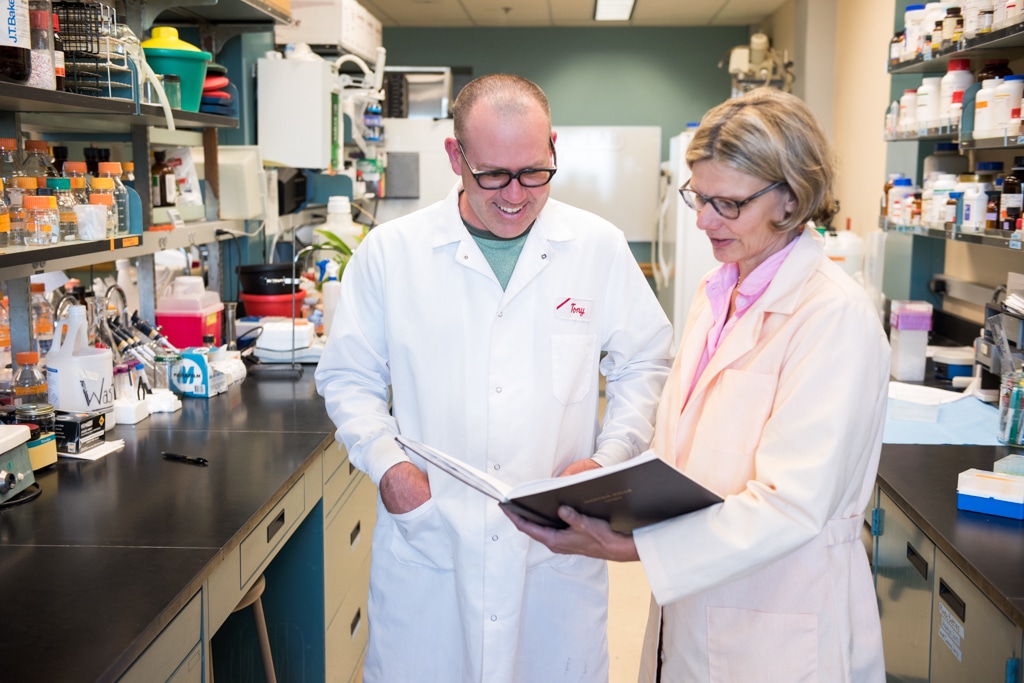 Scientific Bindery Productions is one of the oldest and most reliable manufacturers of the highest quality scientific and laboratory notebooks.  Our books are used to record research and to protect intellectual property by leading scientists, medical researchers and engineers in academia and in the biotech, medical, pharmaceutical, environmental, cosmetic and beer, wine and spirits industries around the globe since 1912.

We are a family owned company begun in 1912.  Joseph Kahn, an immigrant to the United States, founded the Scientific Bindery to serve the growing scientific community in the Chicago area.  His son, Simon, joined him upon returning from serving as a gunner atop fighter bombers in Europe during World War II, eventually assuming leadership of the company.  He was joined by his wife, Esther, who enjoyed establishing and maintaining relationships with our customers.

Terry Czerwinski, PhD, Simon and Esther’s nephew and a professor of Mathematics and Computer Science at the University of Illinois at Chicago, first joined the bindery to assist in bringing it into the digital age.  After retiring from the University, Terry, along with his brother, Tom, acquired the company.  The business world was a wonderful follow up to his career in academia.  After Terry’s untimely death, his wife Diane, Esther and Si’s niece, inherited his share of the company.  As of ​2019, Diane and Terry’s daughter, Katherine, is running the company.  She is excited to bring her people skills and attention to detail to provide excellent customer service and high quality products.  Katherine has a Master’s degree in teaching Spanish, and enjoys paddle-boarding on Lake Michigan in the summers.  She really enjoys running the company with her mother and her Uncle Tom.

When Scientific Bindery began, it was located in the historic Printers’ Row section of downtown Chicago, where we remained in various locations for many years.  We are now located in a modern facility in Chicago’s northern suburbs.

Our customers include most of the leading names in academics, medicine, pharmaceuticals, biotech, chemistry, engineering, cosmetics, the environment and the beer, wine and spirits industries.   Some have been with us for our entire history of over 100 years.

Our workforce and personal service

Our ethnically diverse workforce prides itself in providing friendly and professional customer service.  You can always count on us to provide you with the closest personal attention.  Feel free to email us at any time or call us during business hours.